What is going on CSharp 6

I´m back again into the arena. Sorry for the long time since I last wrote a post, back in August. Certainly there have been lots of things to take care off, but I don’t want to stop sharing things with my friends. The good part is that I´ve been learning lots of interesting things I will share with you.

A couple of days ago an interesting Pluralsight course fell into my hands, What’s new in C# 6.0, by Scott K Allen. I really recommend if you can watch it, not only because of the content, but also because Scott is a great speaker and teacher. I felt really amazed with what is coming in C# world, so I wanted to post about the main new features of the language.

Everything I’ll tell is possible because of the new compiler, .Net Compiler Platform, Roslyn. It is an open source project that we can download and see the source code. It comes along with a new Visual Studio 2014. At the time of writing this, every of this is under beta testing version so I have downloaded it for free and try it.

With C#6.0 we can set the initial value of properties easily:

See how we can initialize even a read only property. 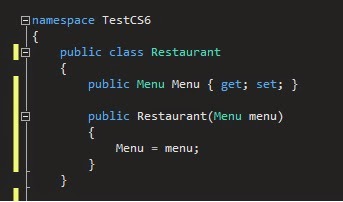 With Primary Constructor we don’t need to specify the constructor, instead we can use primary constructor together with autoproperty initializers:

The code becomes more elegant and concise and the benefit is that the menu primary contructor variable is available in the rest of the class as well.

Initializing a dictionary is now more concise with the new syntax:

Until CSharp 6 the following piece of code is illegal: 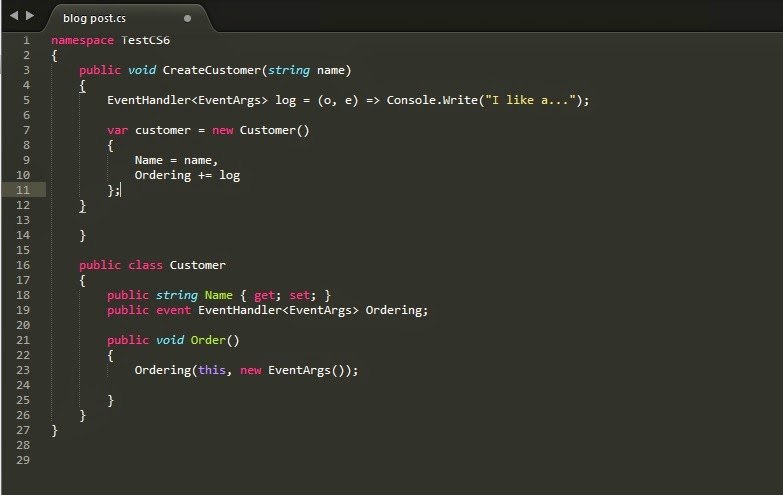 Now we can specify a variable number of arguments with IEnumerable and not only with array, like this:

Normally we declare variable and then we assign it a value of an expression. C# 6 will allow us to join the declaration and the expression. Let me show you an example: 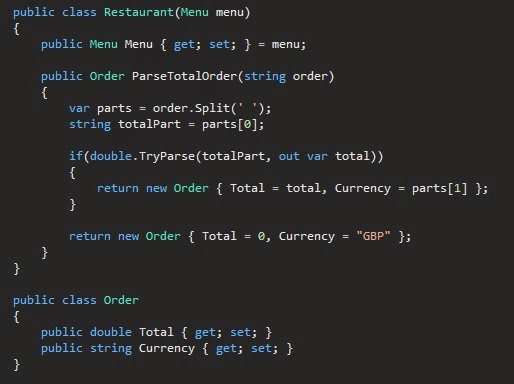 See how we declare out total inside the TryParse.

The benefit is that the code has become more explicit and that we have declare the variable where it makes more sense, taking more control over the scope. 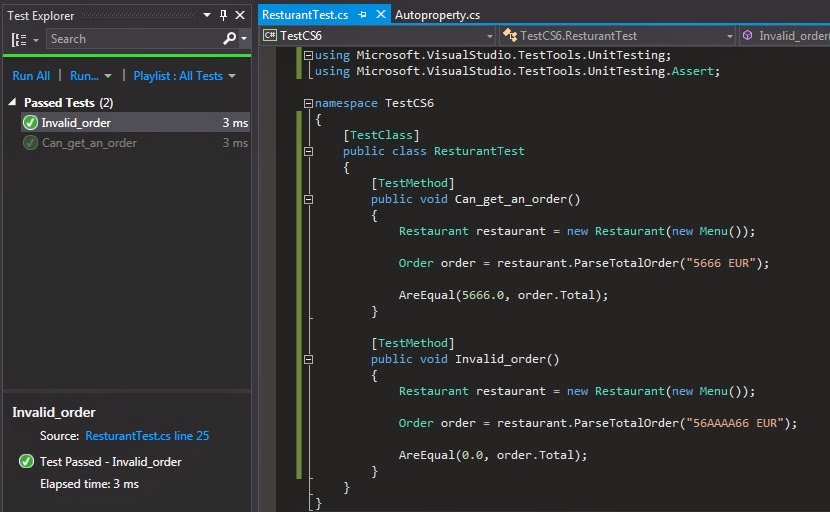 Now instead of having lots of null checks before accessing properties of object, we can use ?. so we’ll get the value of the property only if the object is not null, like this:

This feature allows to assign values of properties using Lambda syntax, like we have done here for NumberOfDishes:

There are a few more of features and some of the explained here may be dropped, but this post is just a taste of what we will have soon available. It makes a bunch of small features but altogether it will allow to code simpler and more concise.

Looking forward to have these tools in our daily projects!